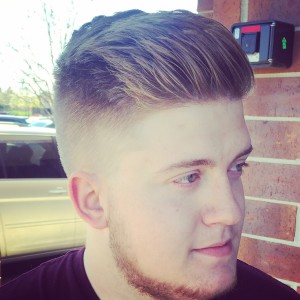 Why not start 2016 off right with a new hot look? 2015 saw an explosion of new hair trends in the men’s hair industry, some of which are predicting to stick around in 2016. So if you’ve wanted to try a new edgier look come on into Hair Mechanix. We can clean you up and get you ready to greet 2016 looking good.

The first part of 2016 is going to be focused on the fade and the pompadour. You’ll also see undercuts, hard parts, bald fade, and the carved undercut that we loved so much!

First things first, the fade. This trend isn’t going to go anywhere any time soon, so if you’ve been hoping to try it, this is the year. You have several options when it comes to your fade. Medium fades, fades higher up on the head, and bald fades (more on those later).

Also top on the list: The Pompadour. Pompadours are going to carry over strong into 2016. Its a nod to classic cuts from yesteryear, with a modern messy twist. The length of the pompadour will vary, so you can make it your own. Add some texture and you’ll be ahead of the curve. 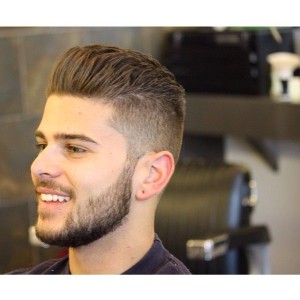 This cut here is the blueprint for every style 2016 is going to bring. Pompadour on top, with varying fades on the sides with a beard that is well kept but still sexy.

2016 is set to be the year that beards cleaned themselves up. If your beard has been out of control for too long, then try out bear trimming and shaping services. We will clean up your scruff and make you look like a clean professional look.

So now you know some of the hottest trends coming in 2016 and we can help you get these looks. Call to book an appointment today or walk in to any of our great locations!